Paul Ezell says he was growing marijuana to help his wife manage pain. But what happens now that medical marijuana is legal?

Get a compelling long read and must-have lifestyle tips in your inbox every Sunday morning — great with coffee! 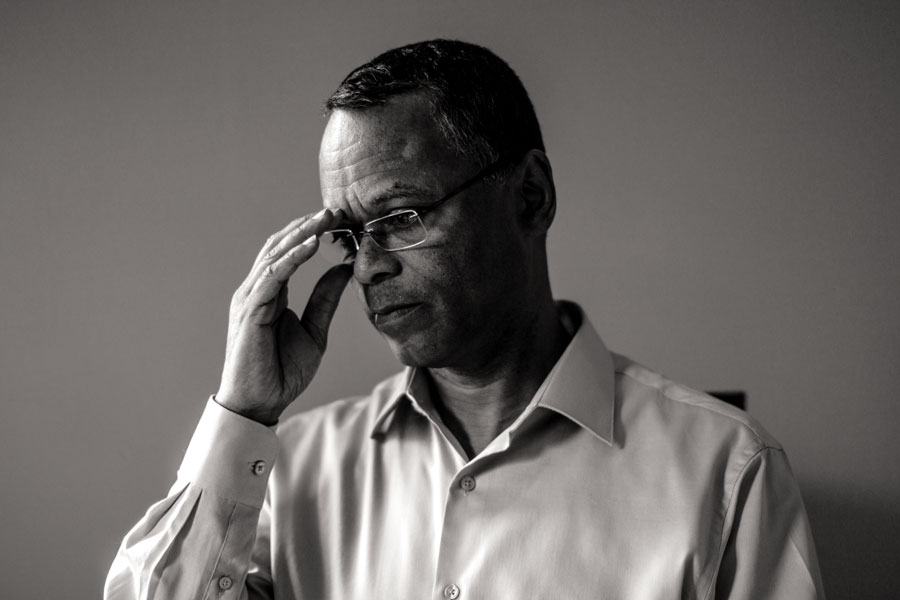 Six years ago Paul Ezell was sent to prison over the marijuana plants in his basement. Now that medical marijuana is legal, he’d like his life back. Photograph by Neal Santos

It’s a Wednesday — April 23, 2014 — before sunrise, on a quiet residential street in Havertown. Paul Ezell, lying in his bed, asleep, hears commotion downstairs — the sound of bumping around on the first floor of his three-story home. It wakes him up as he lies alone in the queen-size bed that he and his wife, Jayne, once shared.

He still thinks of her often — of Jayne. Of her as a lover, as a person, as a mother. He sometimes feels as though she’s still there with him, lying beside him. Now, startled awake, he wonders — in a dream state, forgetting, somehow, in this moment, that she’s been dead for nearly a year — whether the sounds have awakened her, too. Of course, they haven’t. But how long does it take, really, to erase the sensation of the woman who’s slept by your side for 26 years? The only woman you’ve ever loved. The mother of your child.

The commotion continues — bump-bump-bump-thump-thump — beneath him. He tosses right and then left, eyes still closed. Slightly more conscious now, he thinks the noise must be his 23-year-old daughter, Victoria, returning home early in the morning.

He lifts his head, looking left, over to his alarm clock. It reads 6:30.

Dammit, he says to no one. But there’s more time to sleep, he thinks, closing his eyes again. He puts his head back down on his pillow and —

“Show me your hands!” a man yells out of the darkness.

Paul has no idea what’s going on. Startled, he sits up, forcing his brain into action. A flashlight shines brightly in his face, initially blinding him, then illuminating the scene around him. A German shepherd sniffs the perimeter of the room. Paul’s mind races as he looks at the dog. Then he realizes: He’s surrounded. There are at least a half dozen officers there, shouting into his face.

SHOW ME YOUR HANDS!

Paul still isn’t quite clear about what’s going on.

“I can see that they’re wearing uniforms,” he recalls. “And you know what I thought? I thought I’d had a stroke. I thought they were going to say, ‘Can you see how many fingers I’m holding up’ or something like that. Because I’ve been that guy, you know, checking people’s pupils.”

That’s not an unreasonable thought. What else would cause a swarm of armed police officers to invade the bedroom of a successful 58-year-old ophthalmologist working at a thriving private medical practice? A vaunted member of the community. Paul C. Ezell, MD. Affiliated with St. Mary Medical Center in Langhorne. Degree from the University of Michigan Medical School. Practicing medicine for more than 30 years.

“And the thing is, I should have been able to figure out right away what I’d done, why they were there,” he says. “They said, ‘We’re here to serve a warrant’ — a search warrant on my house.”

About two weeks earlier, investigators at the Haverford police department received a tip that a doctor was growing weed at his residence on Sagamore Road. The tipster added — without proof, and in a charge that would never be pressed in court — that the doctor had been selling the harvest to his patients. The tipster gave Paul’s name and address. Cops then snooped around Paul’s home, in secret, and rooted through his garbage. There, they discovered evidence that raised eyebrows: trimmings from cannabis plants. So they got a search warrant.

Downstairs, cops descend into Paul’s finished basement two floors below. In a corner of the cellar, in a walled-off room behind a white door, they discover a full-blown grow operation: 28 plants in total, sprouting from soil in black planters. After searching the entire home, they find marijuana clippings in plastic containers. Grow lights and fans. They find a Hydrofarm water pump, a scale, plastic bags and multiple bongs. About $1,300 in cash. Paul has a couple computers that the cops seize, along with a copy of Maximum Yield, a magazine about growing marijuana. This is enough to charge Paul with a litany of crimes: conspiracy to manufacture and distribute a controlled substance. Multiple counts of paraphernalia possession. Intentional possession of a controlled substance by a person not registered to possess it. Probably more.

Paul makes a mental list of what he’s amassed in his basement. He also runs through the charges he’ll likely face.

On a wintry Saturday morning in January, Paul’s got on a dark green button-down shirt with long sleeves rolled up. Faded black jeans, black socks, no shoes. He wears his black hair short, and streaks of white run through it — not surprising for a man who’s 64. He fusses nervously, absently, with a gold wedding band on his left ring finger and stares forward through dark brown eyes whose pupils are surrounded by coronas of hazel green.

As he lounges, arms stretched out behind him on an tan couch in a modest Upper Darby rowhouse, Paul tells me he asked himself that same question years earlier — Are you sure you aren’t making a mistake? — when he began growing pot in his basement for his dying wife. And when he asked, the answer was a resounding no: He wasn’t making a mistake.

Hailing from the racially segregated Detroit suburb of Inkster, Michigan, Paul was the youngest child in a four-sibling household. The Ezells lived right on U.S. Highway 12, Michigan Avenue, which was the dividing line between blacks in the neighborhoods south of the thoroughfare and whites to the north. But the Ezell children went to school with the white kids, in the better schools. It was a choice that Paul’s dad made in part based on his own experience fighting segregation, fighting for a fair education himself.

Paul’s mom and dad met while attending Michigan State University in East Lansing — a couple of educated black people in a sea of whites in the 1940s. Which wasn’t easy. Paul’s dad, William Ezell, made sure to avoid sending his photo along with his college applications — a way to ensure he’d be seen for his grades and qualifications rather than his skin color. He became a veterinarian. His wife, Ina, stayed home to raise the kids.

Paul showed an aptitude for learning early on.

“He was about six when he called me outside to the driveway to watch one of his experiments: He sprinkled salt on a slug,” Paul’s sister, Ruth Ezell, says. “As it shriveled and died, he explained to me the process of osmosis that led to the creature’s demise. It’s no wonder one of our cousins nicknamed him ‘the Professor’.”

Paul read a lot, according to Ruth, and he was precocious. “There were two separate incidents I learned of when he was in middle school,” she says. “In both, he questioned the accuracy of something the teacher said. One teacher responded, ‘If you know so much, you get up and teach the class’ — which Paul did. In the other, a teacher was explaining the timing of a scientific development when Paul respectfully corrected him with an earlier date. The teacher took issue, so Paul returned to class the next day with a book from his dad’s library documenting that development.”

Paul was smart from an early age, but really, all the Ezell kids were. Their parents would have it no other way. The Ezells had subscriptions to Detroit’s three daily newspapers at the time, its weekly black-owned newspaper, and magazines such as Look, Life, National Geographic, Ebony and Jet. (Ruth would become a well-respected television journalist in St. Louis.)

Paul is small — five-foot-five and thin — so he didn’t play sports for larger athletes. No football. No basketball. But he’s athletic and driven. His sister brags about how Paul set a goal of earning a black belt before high-school graduation and did so in tae kwon do during his senior year.

He apparently tested well, too; both he and his sister say he turned down acceptance letters from Stanford, Harvard, and the University of Chicago, among other prestigious schools, in favor of a program called Inteflex at the University of Michigan.

As a child, Paul was torn between following his father into veterinary studies and pursuing astronomy to work…