When Yelak Biru was diagnosed with stage 3 multiple myeloma in 1995, his prospects looked grim. The antibody-producing immune cells in his bone marrow were growing out of control and had lodged in several of his bones. He was a newly married graduate student, just 25 years old. The disease was considered incurable, and freshly diagnosed patients, such as Biru, lived an average of just two or three years.

But this success has created a new problem. The disease is currently incurable, and better therapies—and perhaps, one day, a cure—are still desperately needed for the 32,000 Americans who are diagnosed each year with multiple myeloma.  Because patients are living years longer, clinical trials for assessing these new therapies may need to run eight years or more to reveal whether an experimental therapy extends patients’ survival. This is much longer than a generation ago. “Patients cannot afford to wait,” Biru says.

They may not have to. With advanced flow cytometry or next generation DNA sequencing, scientists can now peek directly at the disease inside a patient’s bone marrow and detect just one cancer cell in a hundred thousand or sometimes a million healthy cells. This measure, called minimal residual disease (MRD), allows scientists an unparalleled view into disease progression or remission. By better understanding what MRD measurements signify, physicians could one day determine how much disease a treatment must eliminate to prevent relapse.

In blood cancers like leukemia, where MRD is most easily measured, its use could help accelerate clinical trials and improve patient monitoring and treatment. But significant questions remain. At a panel discussion in May hosted by Scientific American’s custom media division and Amgen, Inc., experts from industry, academia, a former FDA regulator, and patient advocates discussed how MRD could be used to accelerate clinical trials and drug development—and the obstacles that stand in the way.

“What this is doing is prompting us to rethink how we conduct clinical trials,” said panel moderator Clifford Goodman, senior vice president of the Lewin Group, a healthcare policy consulting firm. “The question becomes, ‘How do you use technology like this to enhance or speed access to important new therapies that can improve patients’ lives?’” 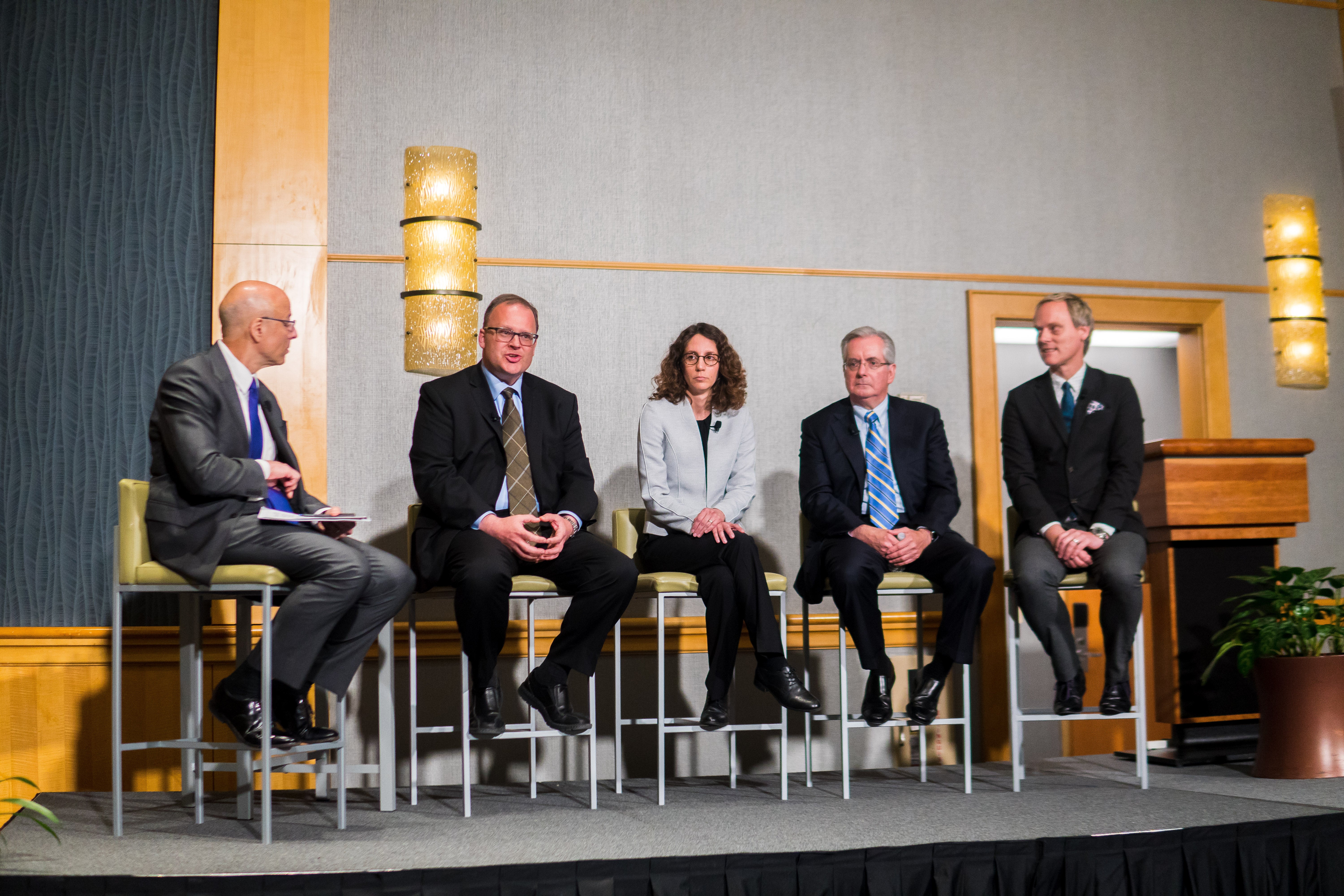 Sizing up a surrogate

To speed the approval of new therapies, researchers running a clinical trial sometimes use a surrogate endpoint—a measure of efficacy that gives an early read on the potential clinical benefits of the therapy being tested. In cancer, where overall survival is the ultimate goal, one widely accepted surrogate is tumor shrinkage, which is accepted as a surrogate endpoint because tumors don’t shrink spontaneously.

MRD may be able to serve as one of these surrogate endpoints. In 2018, the FDA for the first time granted accelerated approval of a cancer drug based on a measure of MRD. In the study used for approval, patients who were MRD-positive were more likely to have a relapse of the blood cancer B-cell acute lymphoblastic leukemia than those who were MRD-negative. Specifically, patients who had more than one residual cancer cell in 10,000 lived an average of about six months without relapse, while those who had fewer lived an average of nearly two years.

Academics, patient advocates and many pharmaceutical companies aim to follow a similar path in multiple myeloma. “Evidence is accumulating,” says Ola Landgren, who is professor of medicine and chief of the myeloma service at Memorial Sloan Kettering Cancer Center. For example, multiple myeloma patients who were MRD-negative survived more than 50 percent longer and maintained remission years longer than those who were not, according to a meta-analysis from an international team led by Dana-Farber Cancer Institute that was published in 2017 in JAMA Oncology1.

Still, some experts remain cautious about using MRD as a surrogate endpoint for regulatory decisions. Kathy Kross, Amgen’s executive director of regulatory affairs, says that for MRD to be accepted as a validated surrogate endpoint, regulators would likely want assurance that it is consistently predictive of overall or progression free survival with several different therapies and in several lines of myeloma treatment. This could require multiple studies, each lasting years, to obtain the statistically valid proof the agency has historically required for a surrogate to be validated and accepted for accelerated approval of a new cancer drug.

Using MRD as a surrogate endpoint could mean shorter clinical trials than those that employ progression-free survival or overall survival as endpoints. But it could also mean more trials and faster progress in the field, says Sarah Holstein, associate professor of internal medicine at the University of Nebraska Medical Center. According to Holstein, one proposed trial under the current paradigm will require 1,100 patients, 6 years to get going, and 10 years more to know if the drug being tested extends overall survival. Using MRD as an endpoint, Holstein says, “we could get an answer one or two years into the study rather than 16 and need only 300 patients instead of 1100. At the same time, we could perhaps be running two or three parallel studies asking different questions.”

Since there are only 25,000 patients with multiple myeloma in the United States, and only a small fraction of them participate in clinical trials, shorter trials with fewer patients means that more trials could run concurrently. This could have the potential to answer more clinical questions faster, Holstein says, which could improve patient care over time.

The FDA may not view a nontraditional endpoint like MRD as sufficient evidence to demonstrate efficacy and support full approval of a new cancer drug. Instead, it’s more likely that the agency may issue an accelerated approval, as it did in 2018 following a B-cell acute lymphoblastic leukemia trial. Under U.S. law and regulations, if a drug fills an unmet medical need for a serious medical condition, the FDA can use surrogate endpoints like MRD to make a regulatory determination based on the accumulated evidence and may approve a new drug through the accelerated approval pathway. These approvals require confirmatory trials to confirm the overall clinical benefit which was predicted by the evaluation of the surrogate endpoint.  Some of these trials may fail. In the case of Avastin for the treatment of metastatic breast cancer, the FDA rescinded the accelerated approval after the long-term confirmatory trial failed to show true clinical benefit.  “There has to be a failure rate. Otherwise it’s not accelerated approval—it’s full approval,” said John Jenkins, a former long-time FDA regulator at Greenleaf Health, an FDA regulatory consulting firm in Washington, DC.

MRD in the Clinic

Eventually, doctors might use MRD measurements routinely to monitor patients, and decide when to stop, change, or restart treatments. For example, a multiple myeloma patient who has been MRD-negative for two years might go off therapy, or a patient who’s been through a round of treatment but remains MRD-positive might warrant another round with a different drug. But using MRD in the clinic requires a higher standard of proof, which is not there yet for multiple myeloma, Holstein argues. What’s needed, she says, are clinical trials—many of them already planned—in which MRD is used to make treatment decisions. Landgren, however, says he believes the evidence is good enough now. He and others at Sloan Kettering are already using MRD measurements to monitor individual multiple myeloma patients.

In the clinic, MRD will not be the only gauge of a patient’s state, and that’s as it should be, Biru says.  “I think the doctor will look at MRD plus me to make a recommendation as far as what my course of treatment should be.”

To learn more about the evolving science and application of MRD, visit Amgen Oncology’s dedicated resource.