During a recent presentation, Jeanne Schulte, coordinator, OUWB Clinical Skills Training & Simulation Center, acted like a doctor who asked a mock patient the wrong questions at the wrong times — and in doing so, did her job just right.

Schulte and the “patient” were demonstrating the purpose of the 35 Standardized Patients (SPs) employed by Oakland University William Beaumont School of Medicine.

Their presentation took place during OUWB’s Mini-Medical School, held at the beginning of the year for parents of first-year med students.

Schulte purposefully asked bad questions to demonstrate the need for SPs — lay people hired to act like patients in realistic situations as a means to help medical students learn how to grapple with sensitive issues. OUWB uses SPs as part of its course, The Art & Practice of Medicine.

“I think most of our SPs are motivated by their strong desire to help our students,” said Robin Lewis-Bedz, assistant director, Clinical Skills Training & Simulation Center, OUWB. “It’s that simple.”

Howard Barrows, M.D., trained the first standardized patient in 1963 at the University of Southern California. Most medical schools today use at least some component of SP training in their programs.

Lewis-Bedz said OUWB’s program has grown with the school. Since 2013, when Lewis-Bedz became assistant director, the number of SPs employed by OUWB has more than doubled. She said the growth has been necessitated in large part by more students in each class.

Additionally, the program has expanded beyond working with OUWB students to also include working with infectious disease fellows and first year internal medicine residents at Beaumont Health, as well as Oakland University’s nurse practitioner program.

“We have a lot more going on than we did years ago,” Lewis-Bedz said. 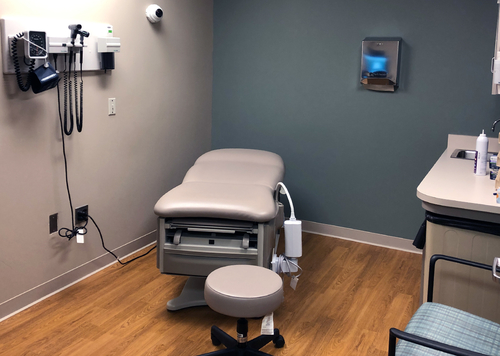 The center includes mock patient rooms designed to look like the real thing, except that they are equipped with cameras so that students can be recorded and evaluated by OUWB faculty. The center also has the necessary technology to allow students and SPs to record data from their encounters.

Ashley Aller, OUWB Class of 2018, is in the second year of her internal medicine residency at University of Chicago Medical Center.

Aller said she vividly remembers the first time she worked with an SP.

“A petite, charming, elderly lady wobbled her way to the interview chair with a look of great discomfort on her face as she simultaneously rubbed the bothersome ache in her hip,” Aller said. “Pure acting, but it was effective. It is striking even now to reflect on how easily she conveyed the feelings and movements of an everyday patient I encounter in clinic.”

Aller said as she progressed through medical school, SPs played a big role in her success. Specifically, she said, when it came to learning skills such as evaluating a patient’s musculoskeletal system.

“It was one thing to read about physical exam skills, and another to practice those skills on an actual human being,” she said. “With the skillful guidance of the SPs, I gradually learned the subtleties of each skill, and then how to combine them into a thoughtful and efficient, and most especially, complete evaluations of a symptom.”

Aller said she also learned how to listen and what to say to a person seeking care.

“SPs are extraordinary at reminding us of the people we are to care for in the end,” she said. “I still reflect upon my SP sessions when I encounter my own patients, and how to translate the vocabulary of medicine to a common language we can all understand.”

She attributes much of her success today to the SPs and OUWB’s Art and the Practice of Medicine course.

“Whenever I receive a compliment, or even a simple ‘thank you’ from a patient, it is really an expression of appreciation for the educators who trained me to practice the way I do,” she said, adding she has “the wonderful SPs to thank for that.”

Who are the SPs? 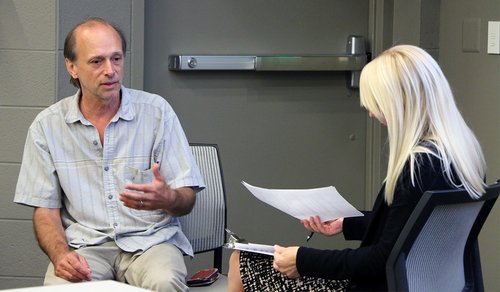 The majority of OUWB’s 35 Standardized Patients are retirement age and come from various backgrounds including law enforcement, emergency response, social work, education, and others. About a third are men with the rest women. (Lewis-Bedz said she is always looking to diversify the makeup of the SPs and encourages anyone over 18 and with interest to apply here.)

The appeal for many SPs is the flexible, part-time nature of the job.

Another appealing aspect? The acting.

“I think all theater programs should let people know that this is a job,” she said.

“You have no idea in what order that information may be asked for,” she said, adding that no two students are exactly alike from one encounter to the next.

Most SPs don’t have a background in medicine, and Lewis-Bedz said that’s OK because “that’s not our goal.”

“The faculty handle assessment of anything related to medical content,” Lewis-Bedz said. “The SPs are much more focused on providing a patient’s perspective, and how they felt being a patient.”

Because the hope is to provide the most realistic encounter possible, Lewis-Bedz said SPs train an average of nine hours for each scenario.

“We spend a lot of time because first and foremost, they need to know backwards and forwards every medically relevant fact (of the specific scenario),” she said. “So there’s a lot of memorization involved. And then the portrayal of the role is where the acting comes in.”

The last component of being a good SP is feedback, she said.

Unlike other schools that might simply have a checklist of points that students either hit or missed, OUWB uses a much more personalized system.

Lewis-Bedz said that stems from a conscious effort to “really focus on what it felt like for the SP to be the patient.”

“That’s the valuable information,” she said. “We spend a lot of time working on how to deliver feedback in such a way that it’s specific, useful, and without judgment.

It’s an important job, Lewis-Bedz said, and that’s partially reflected in the fact that SPs are annually invited to OUWB’s commencement, and recognized during the ceremony.

“It’s a point of pride for me actually…that (SPs) are recognized for the role that they play,” she said.

SP Peter Knox said that’s just one of many reasons he feels more valuable as an SP at OUWB than he does working with other medical schools.

“We give input into the program that is taken seriously where that would never happen at (other medical schools),” he said.

Knox said he also finds it “fascinating” that first-year students at OUWB have exposure to SPs whereby other schools hold off until the second year.

However, the biggest point of pride for Lewis-Bedz and the OUWB SP program is how well-prepared students are when they move on, due in large part to working with SPs.

“I know our students often are recognized for their exemplary communication skills once they leave here,” she said.